Classroom differences are covered by Yuan.

Students at the A.C.E. Language Institute at URI put their English language presentation skills to the test in front of their campus and their school president in October at International Education Week.  At an evening event, the president articulated the richness international students bring to the school,  next a reception followed his and other remarks.  A.C.E. students ringed the reception room with large presentation posters filled with illustrative photos, succinct phrases and colors to find out where cultures meet and differ on social institutions from generational roles to education methods.  Attendees went from booth to booth asking questions prompted by the display, and students were quick on their feet answering in English about their home country. 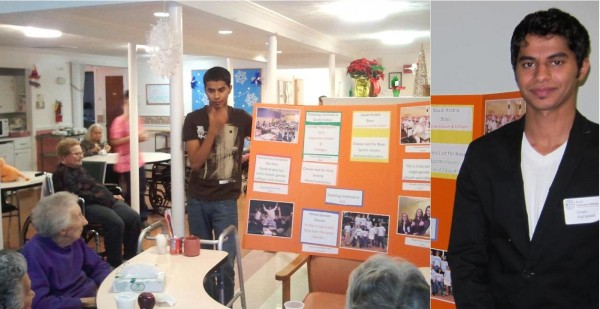 Saleh talks about his all-boys school in Saudi Arabia.

Two months later three students polished their presentations into full 20-minute oral reports. They were in front different listeners, seven residents of a Rhode Island nursing home. Taking the floor, each was forced to speak slowly and clearly, enunciated and responded to the women’s many questions, and used the large pictures effectively to make their points. Saleh Alghareeb talked about colleges and high schools for boys or girls in Saudi Arabia and co-ed schools in the United States, Yuan Cheng from Taiwan spent his twenty minutes on his familiar lecture-style approach to the classroom versus the American discussion, and Taichen Jiang from China’s explained grandparents and the elderly in custom, contributions, and care in the two countries.

This last topic sparked an impromptu panel discussion with all three talking sharing the place of older people their country.  The residents invited them back for an encore performance next semester.  All of the women were impressed with their language skills and gave them lots of compliments, asking for posters on food, family and festivals for next time.  The students were energized by sharing their country before two English-only audiences, with solid skills outside of the classroom and a community now richer with their research, homes, and personalities.

Don’t miss video of poster presentations at the A.C.E. Language Institute at SPU Winter Academy  below.

← Happy Holidays from A.C.E.
A Saudi Student’s View on Snow, Sunglasses, and Studying at the A.C.E. Language Institute at Montana State University →